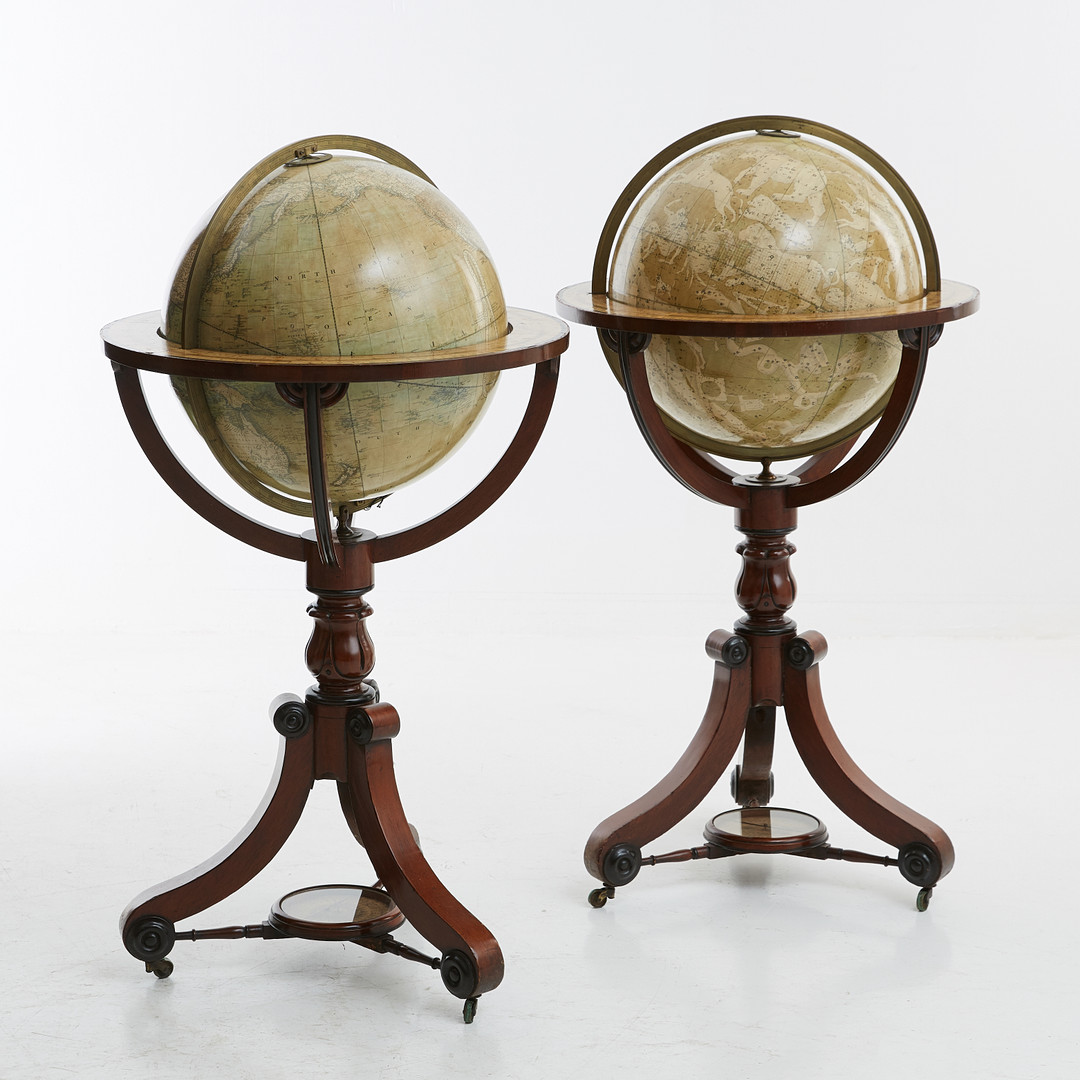 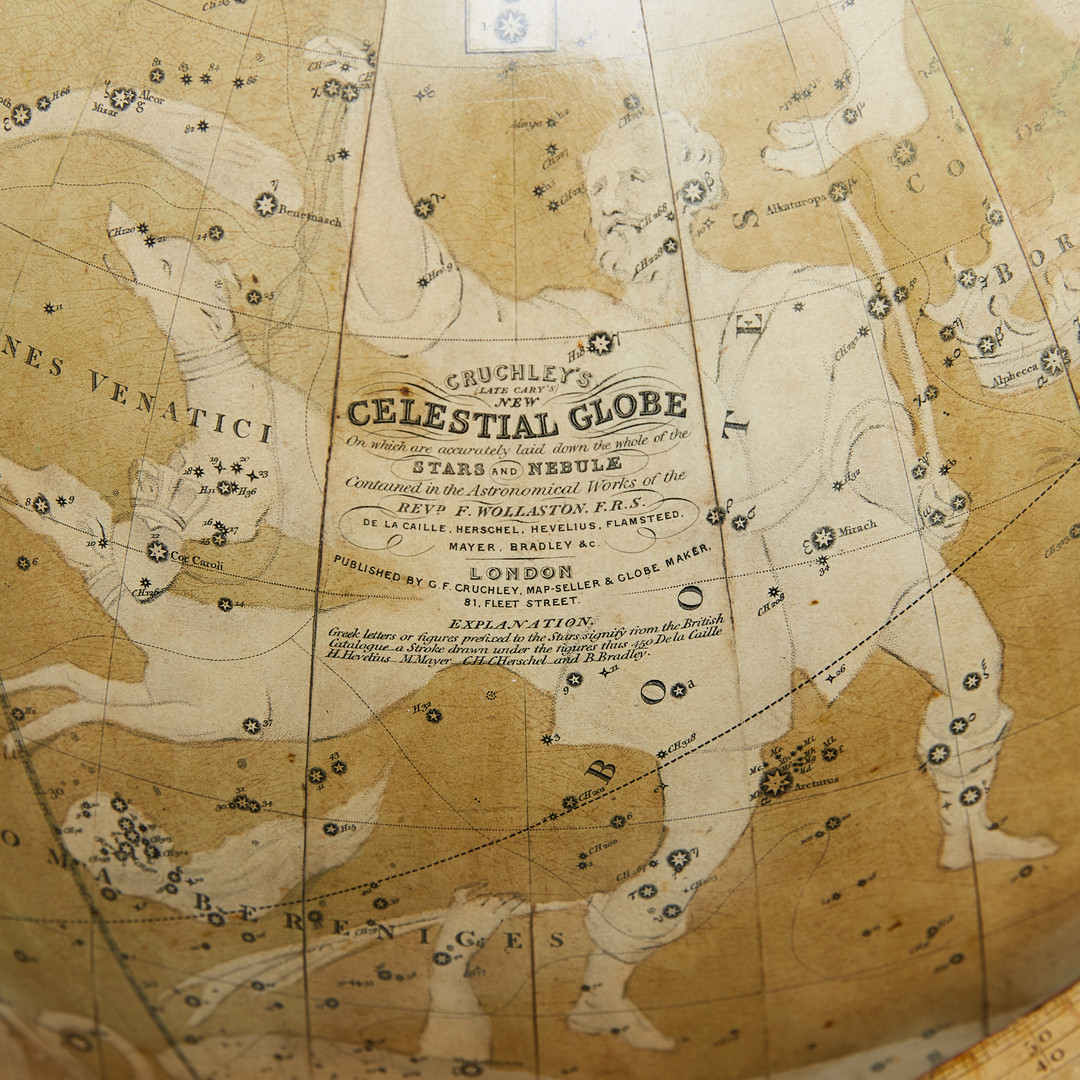 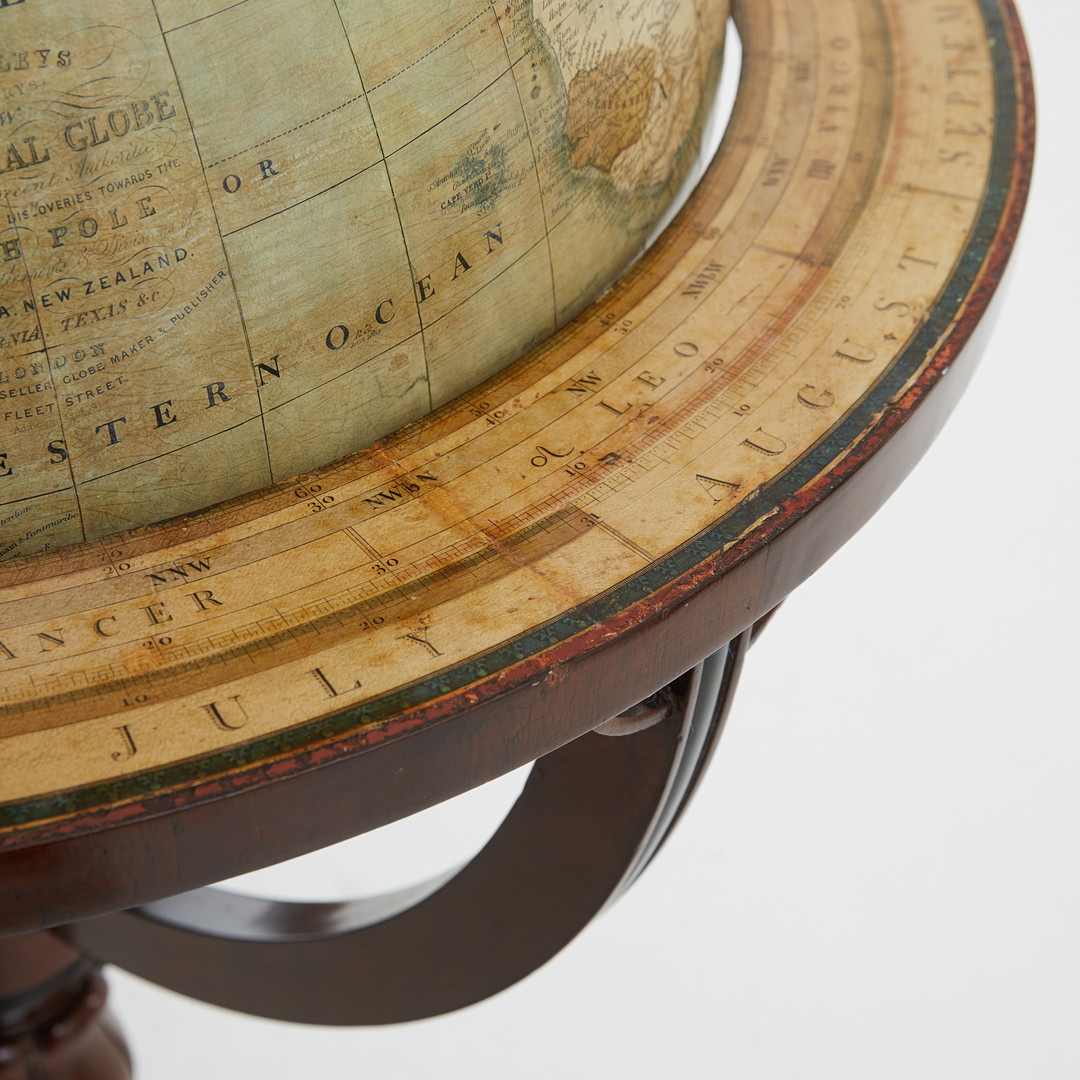 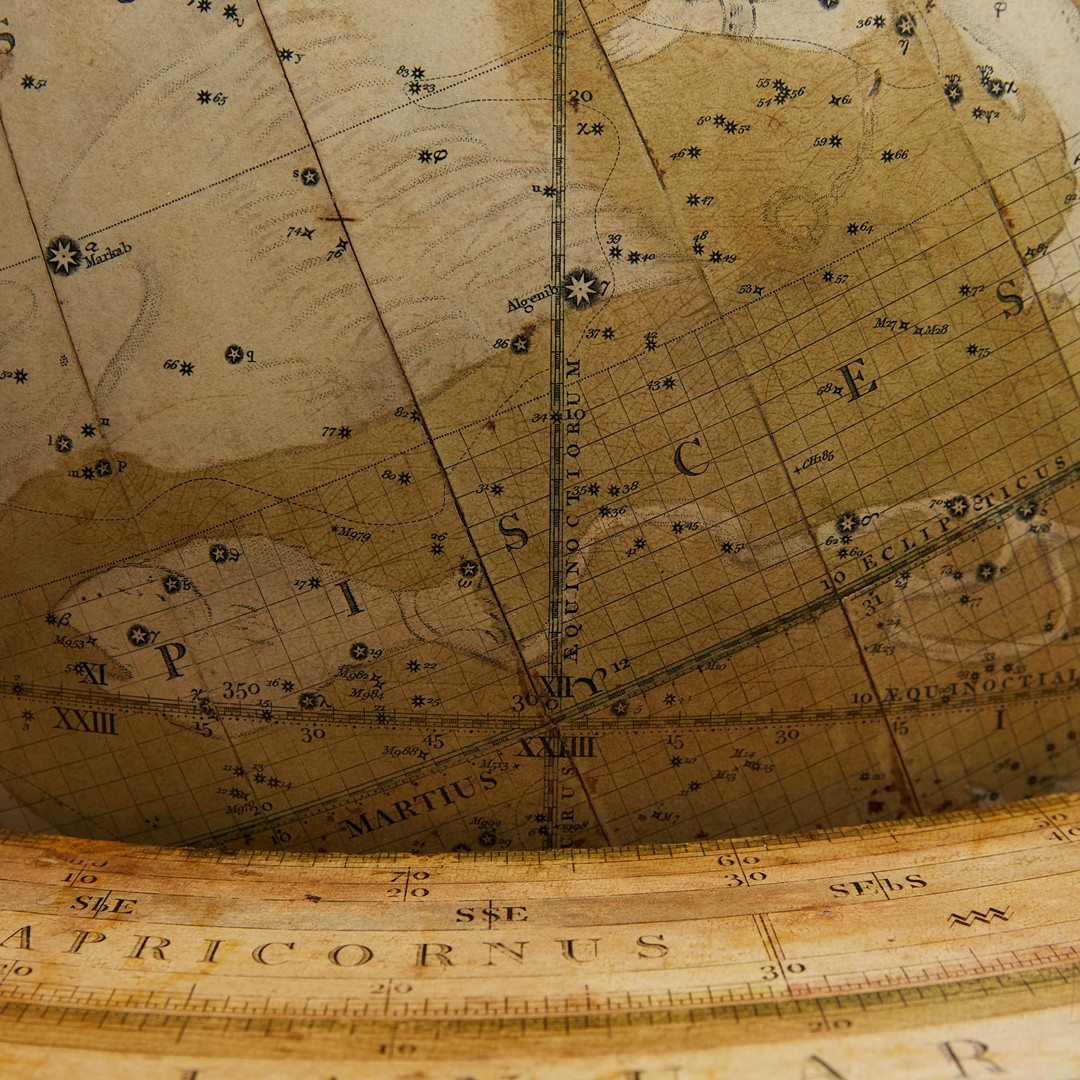 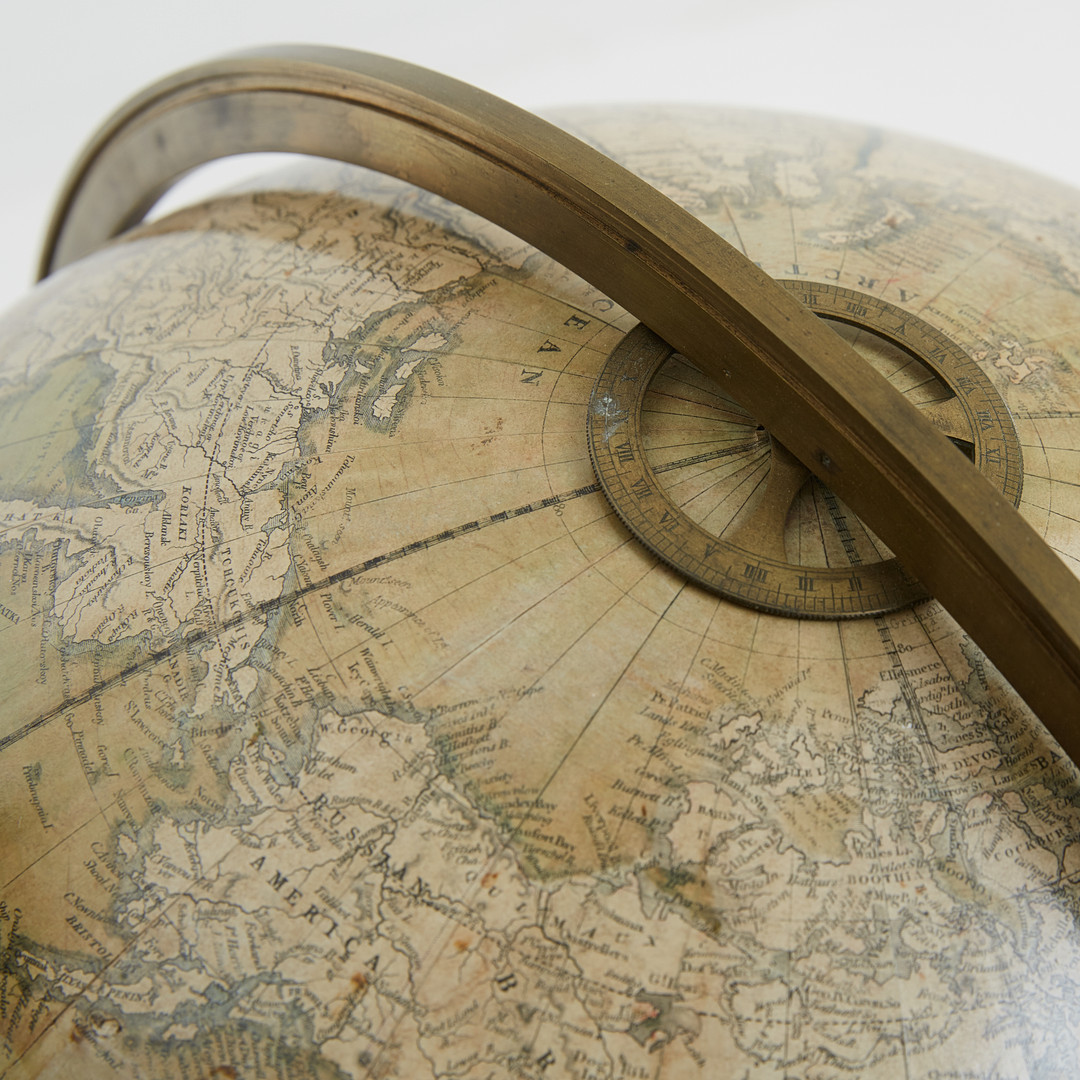 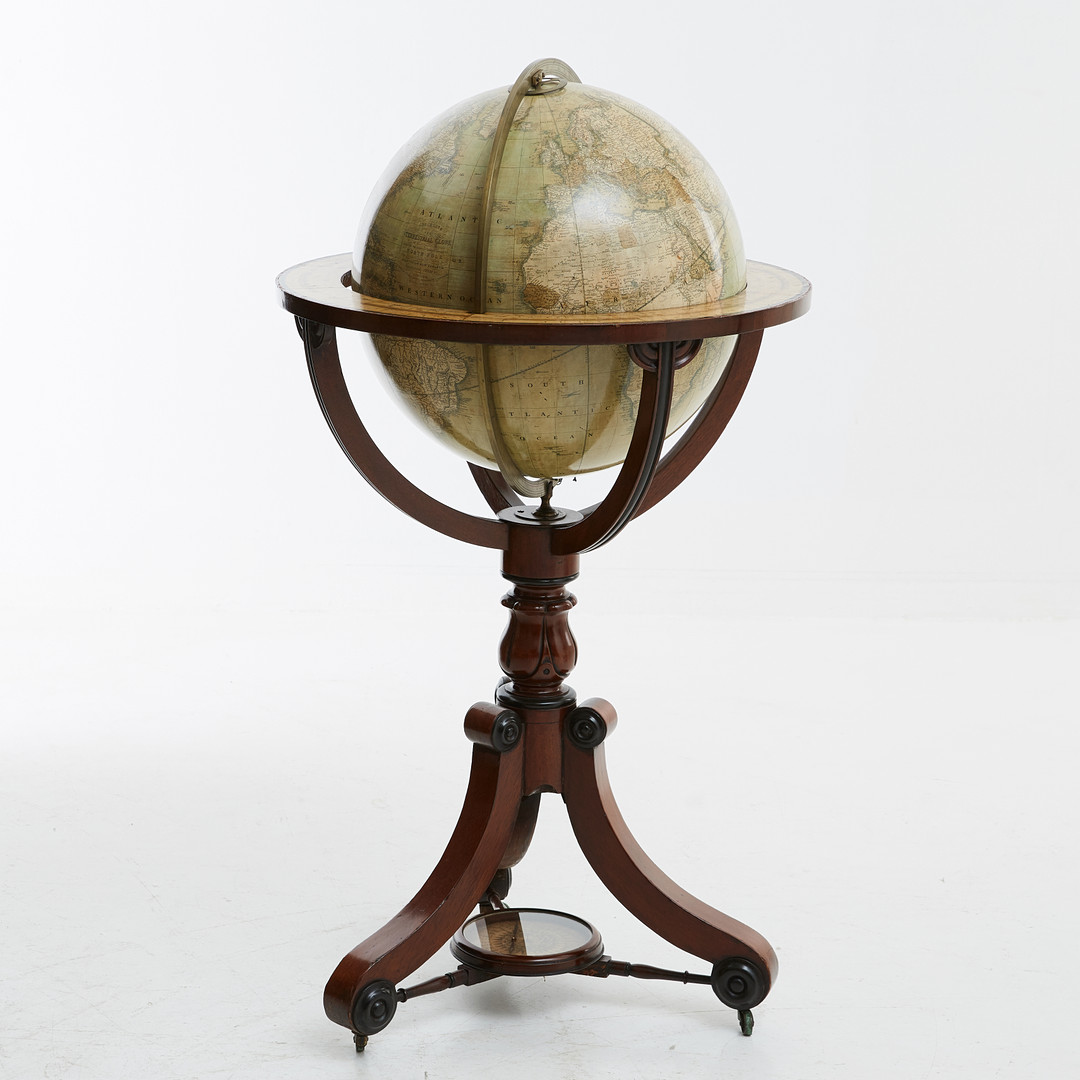 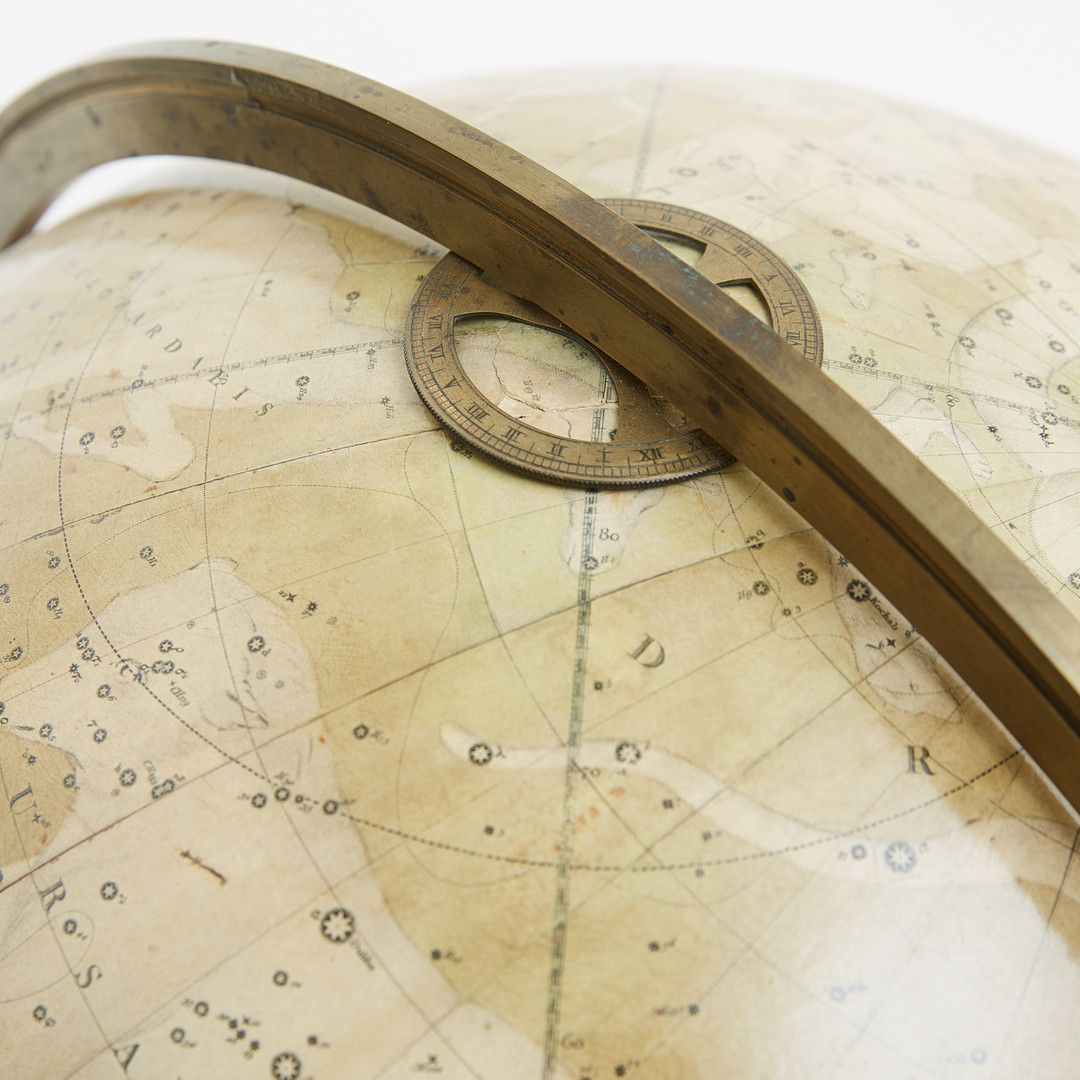 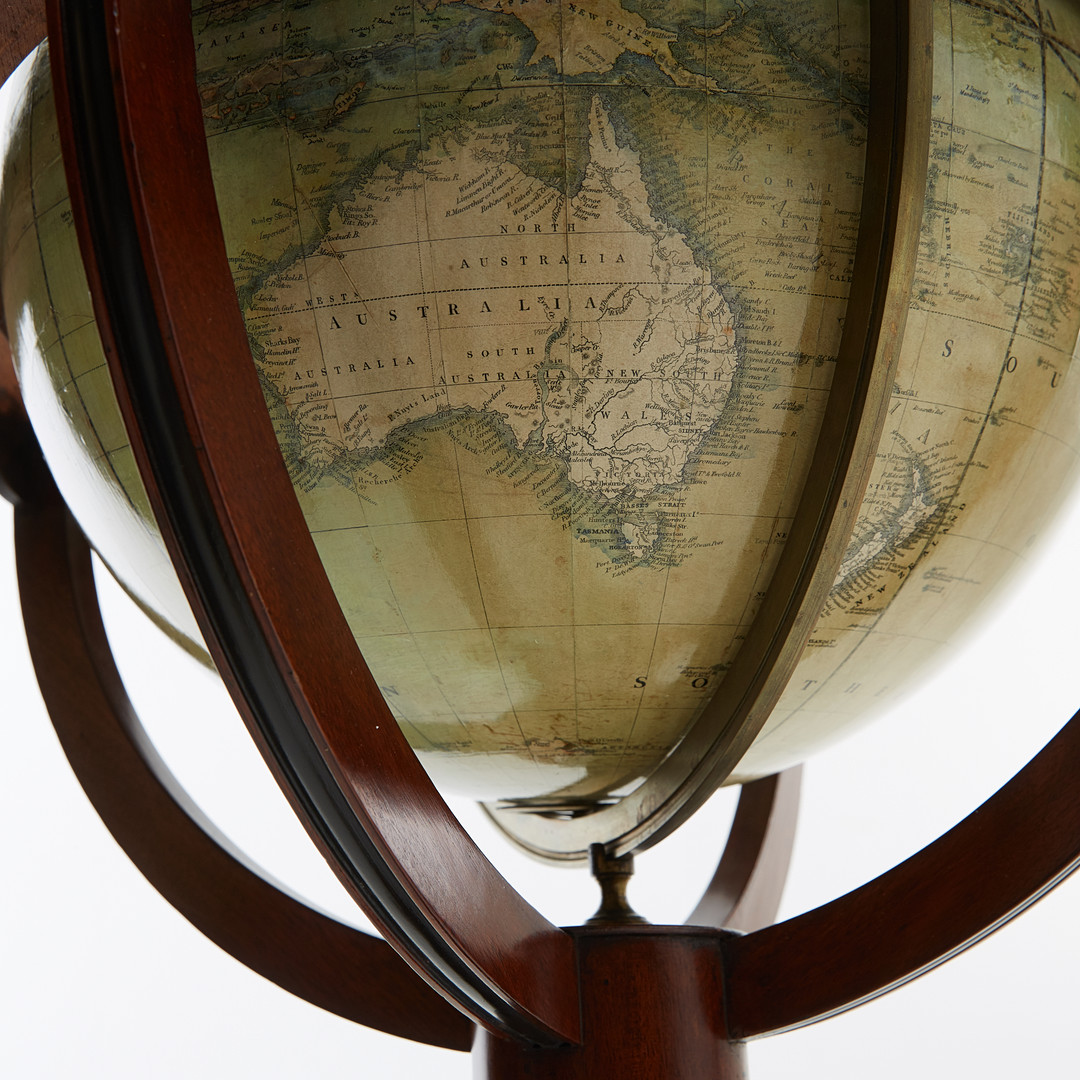 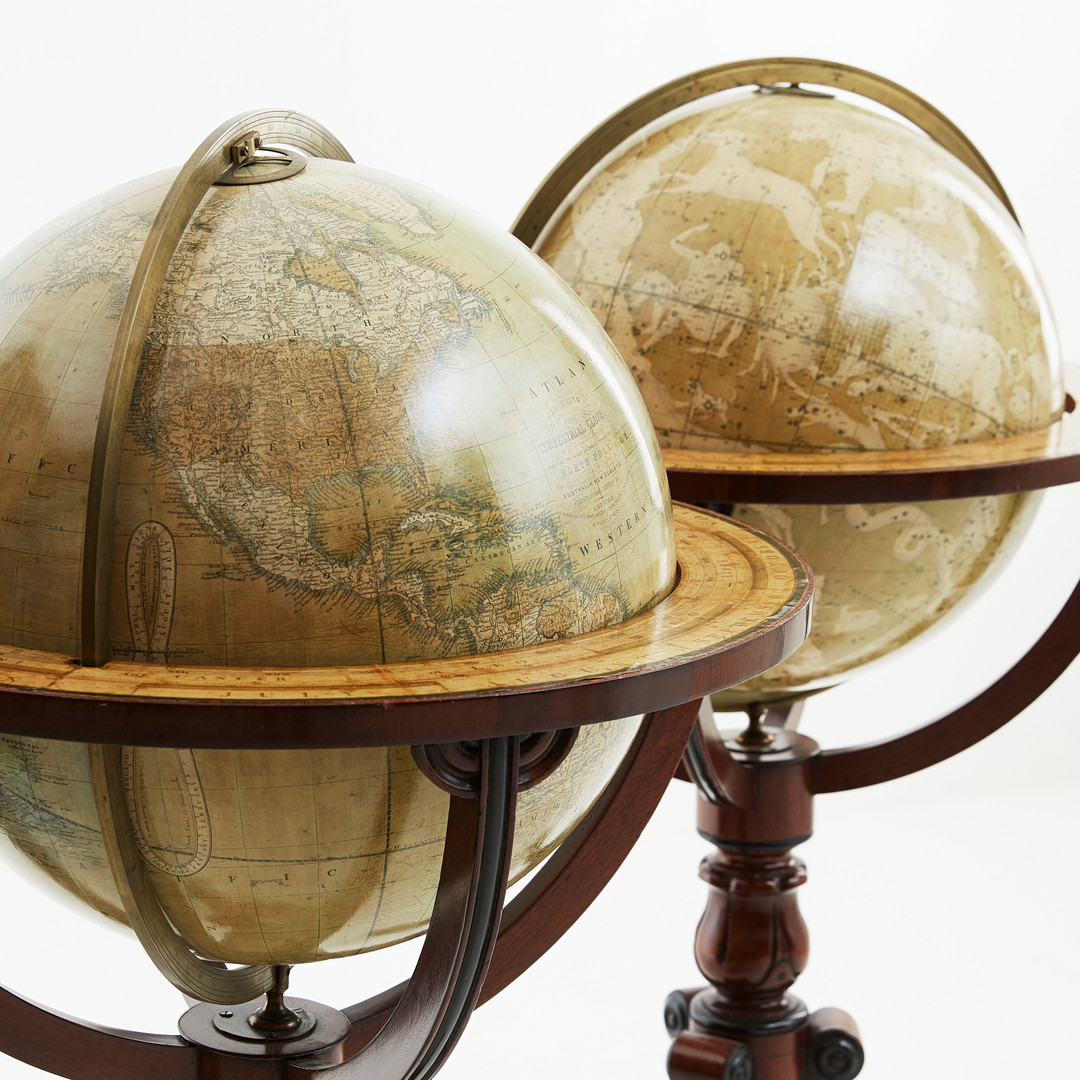 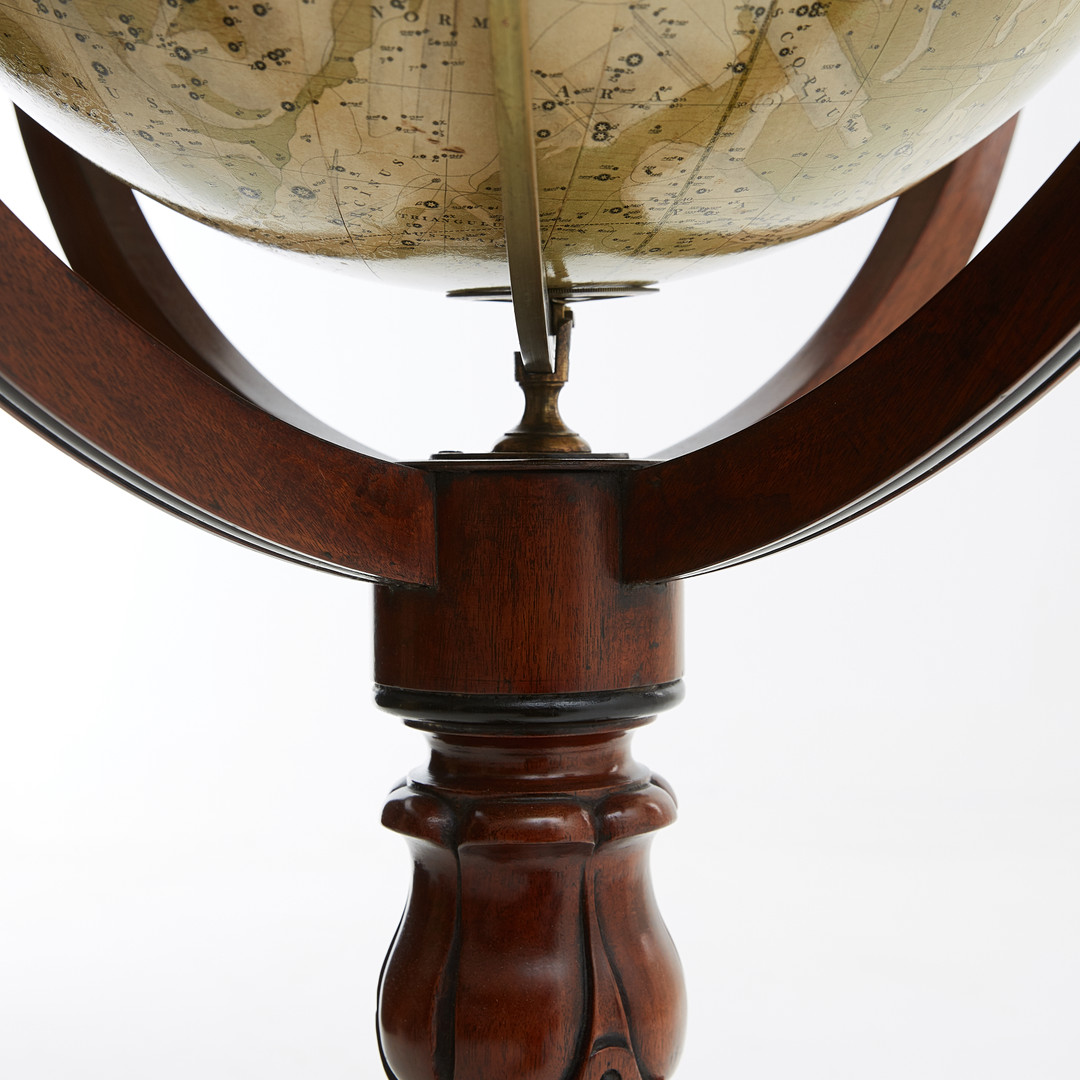 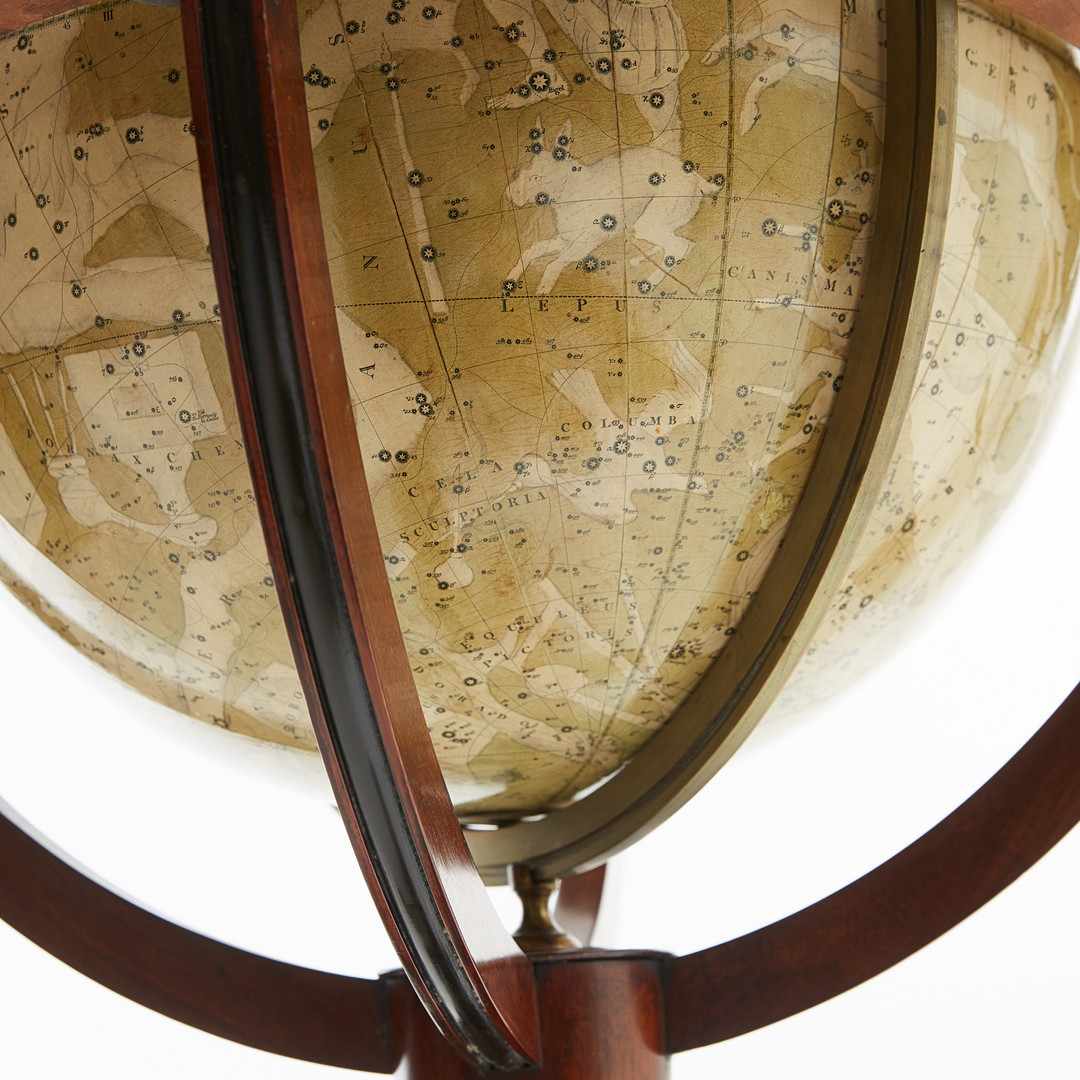 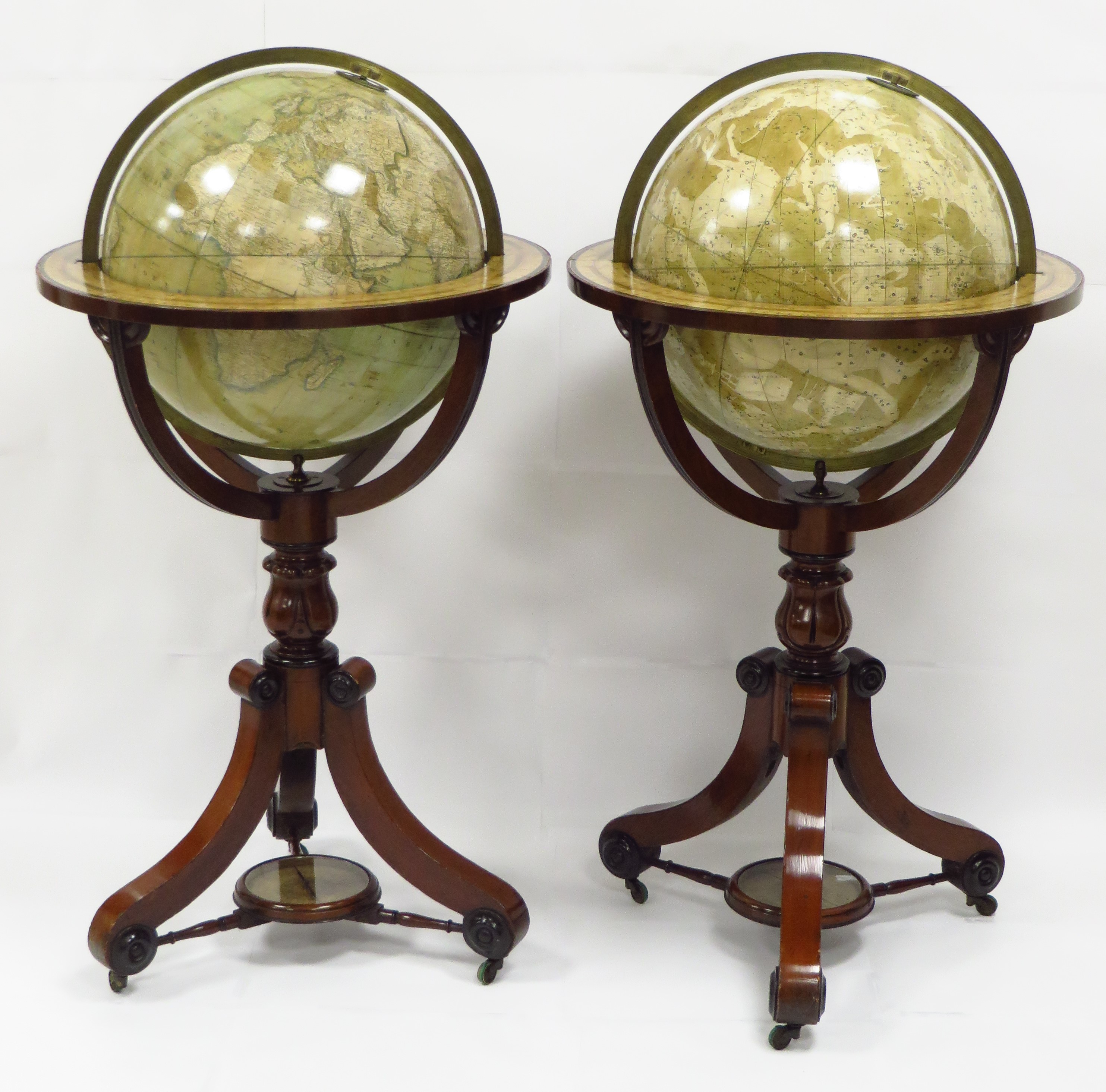 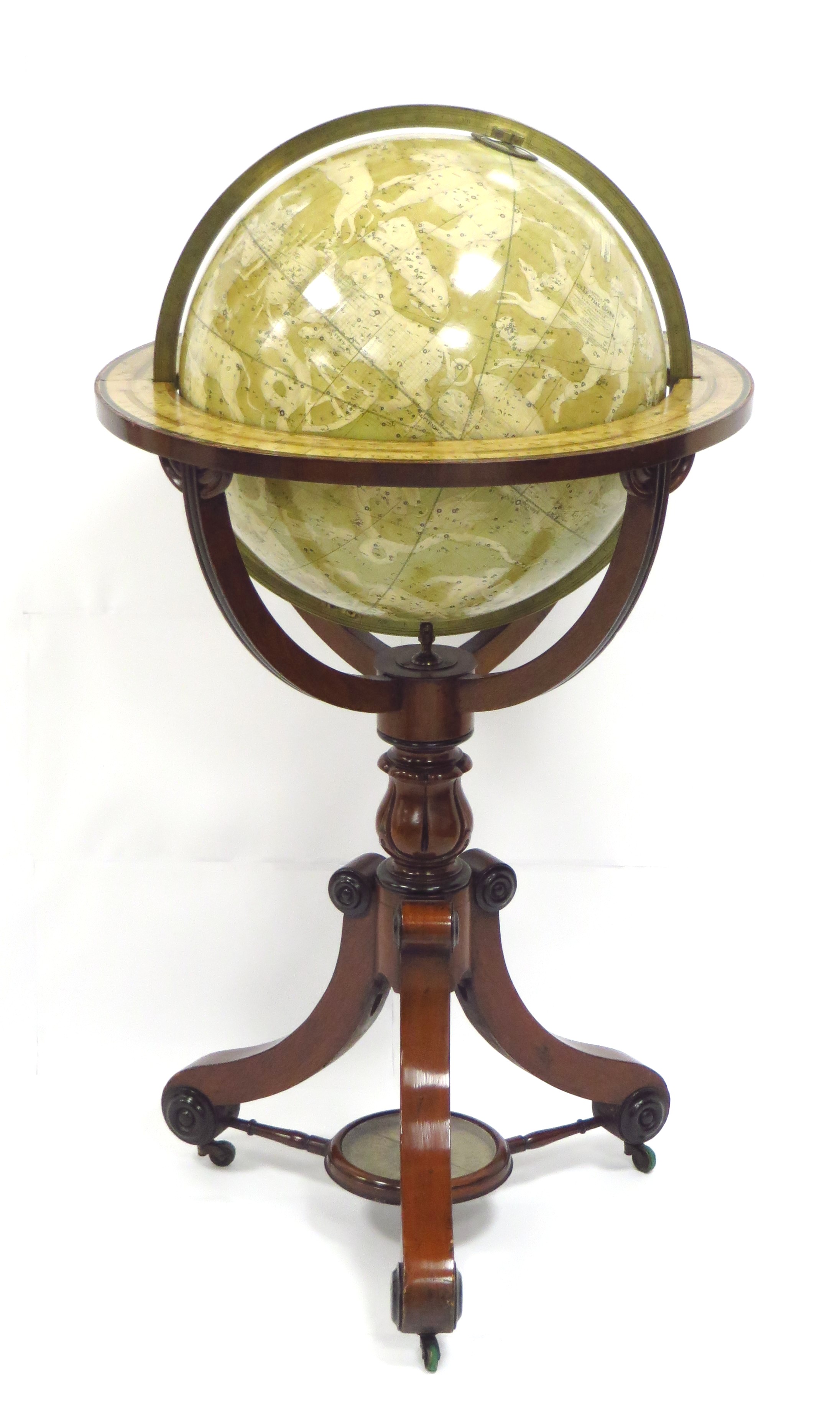 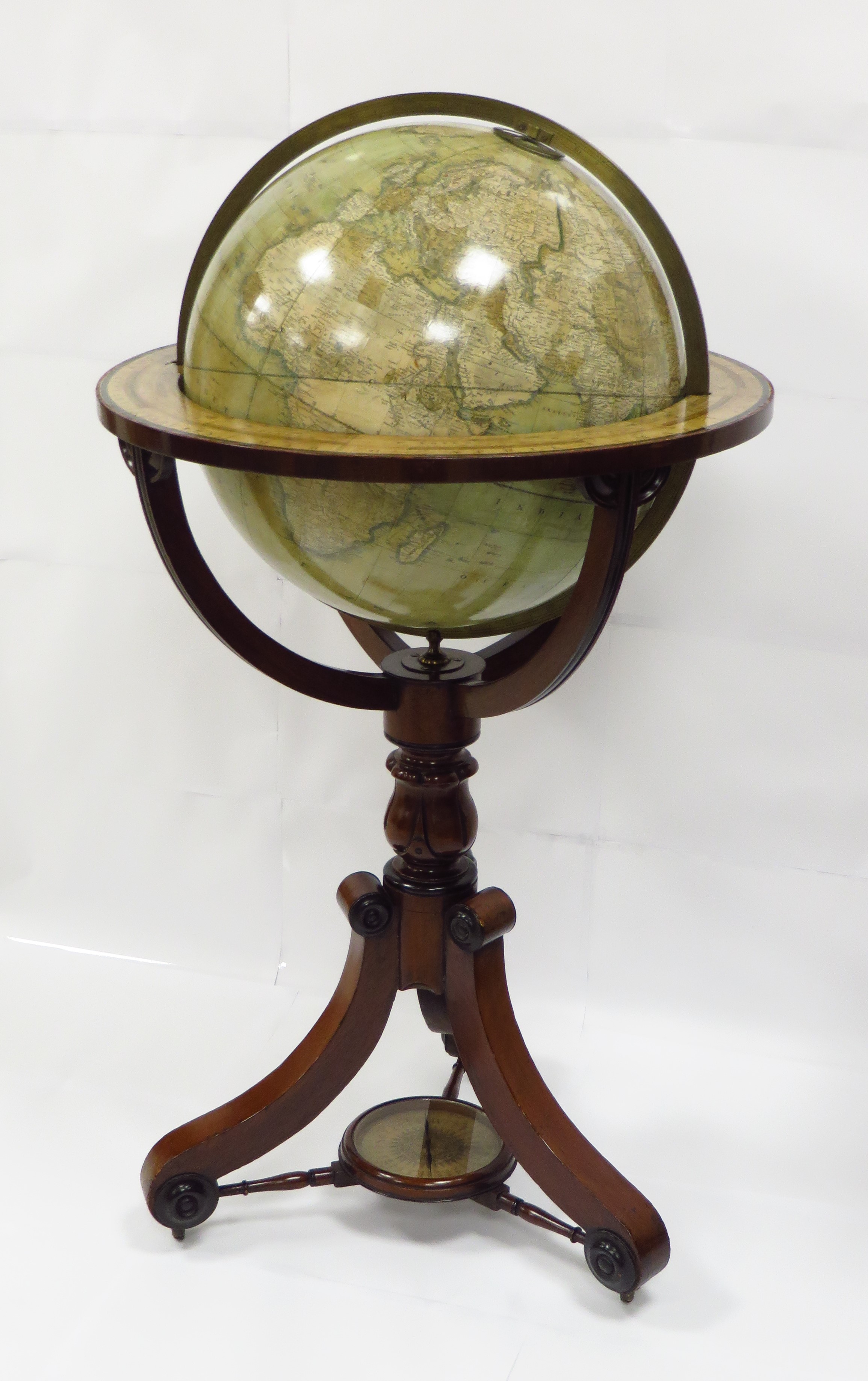 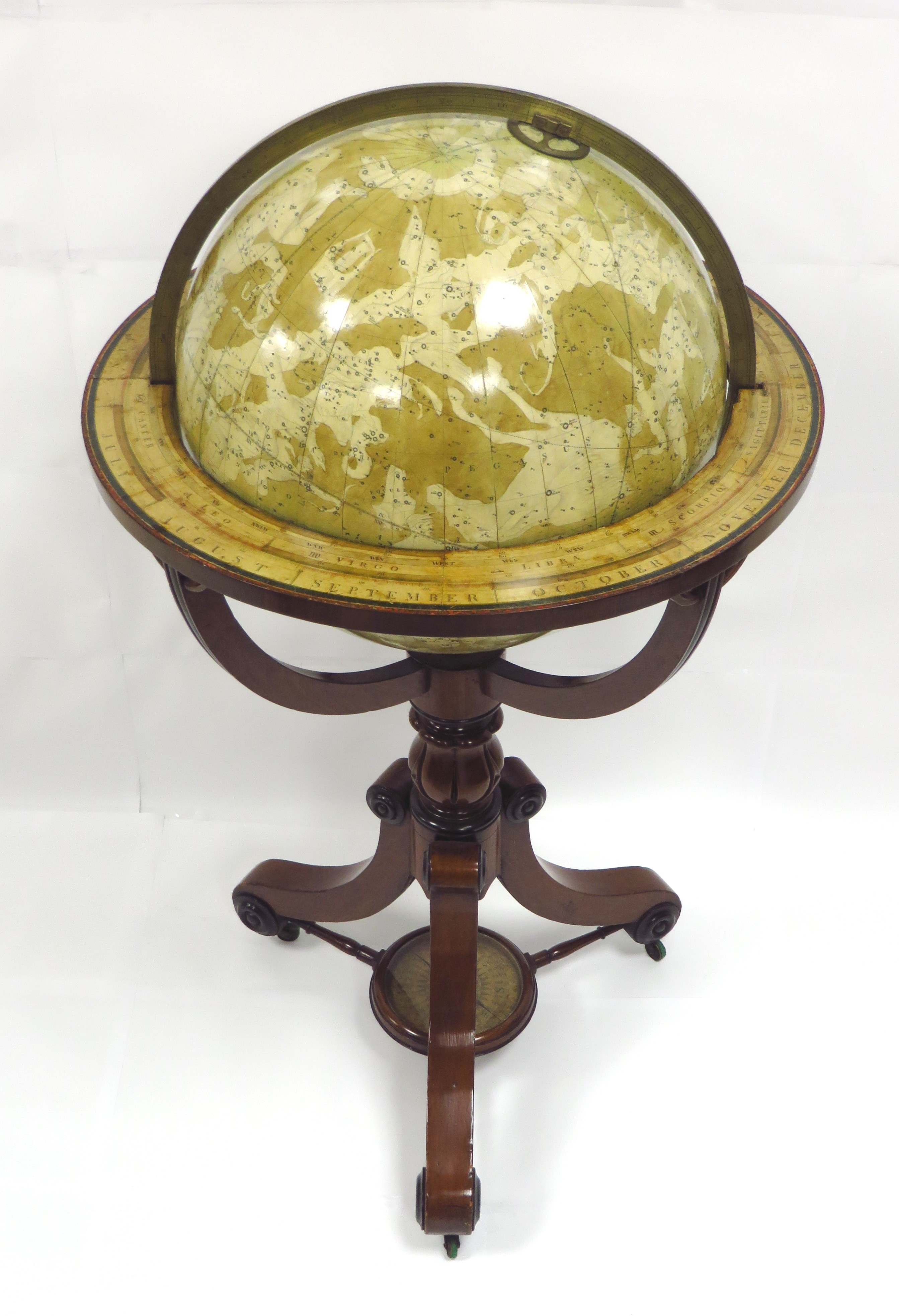 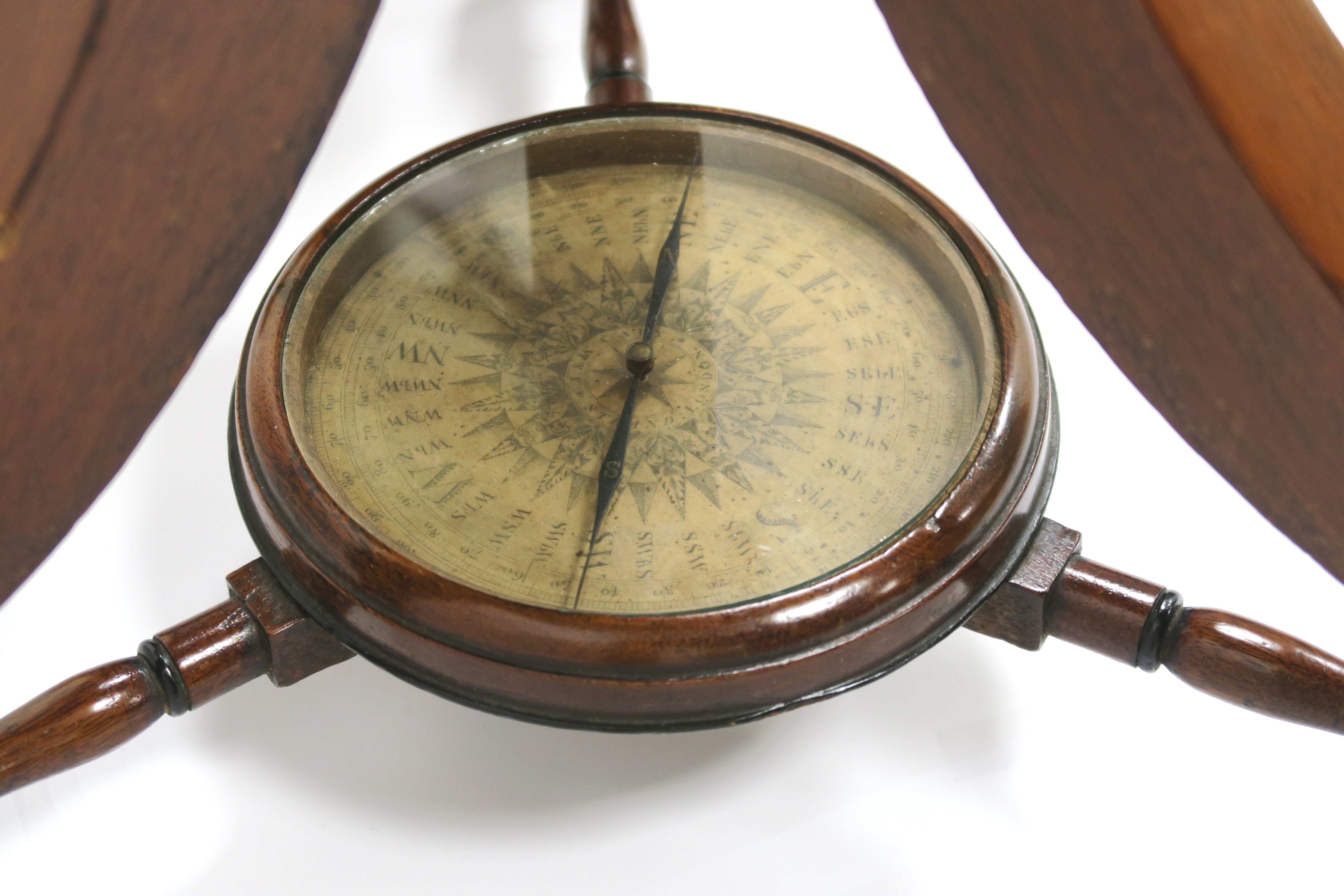 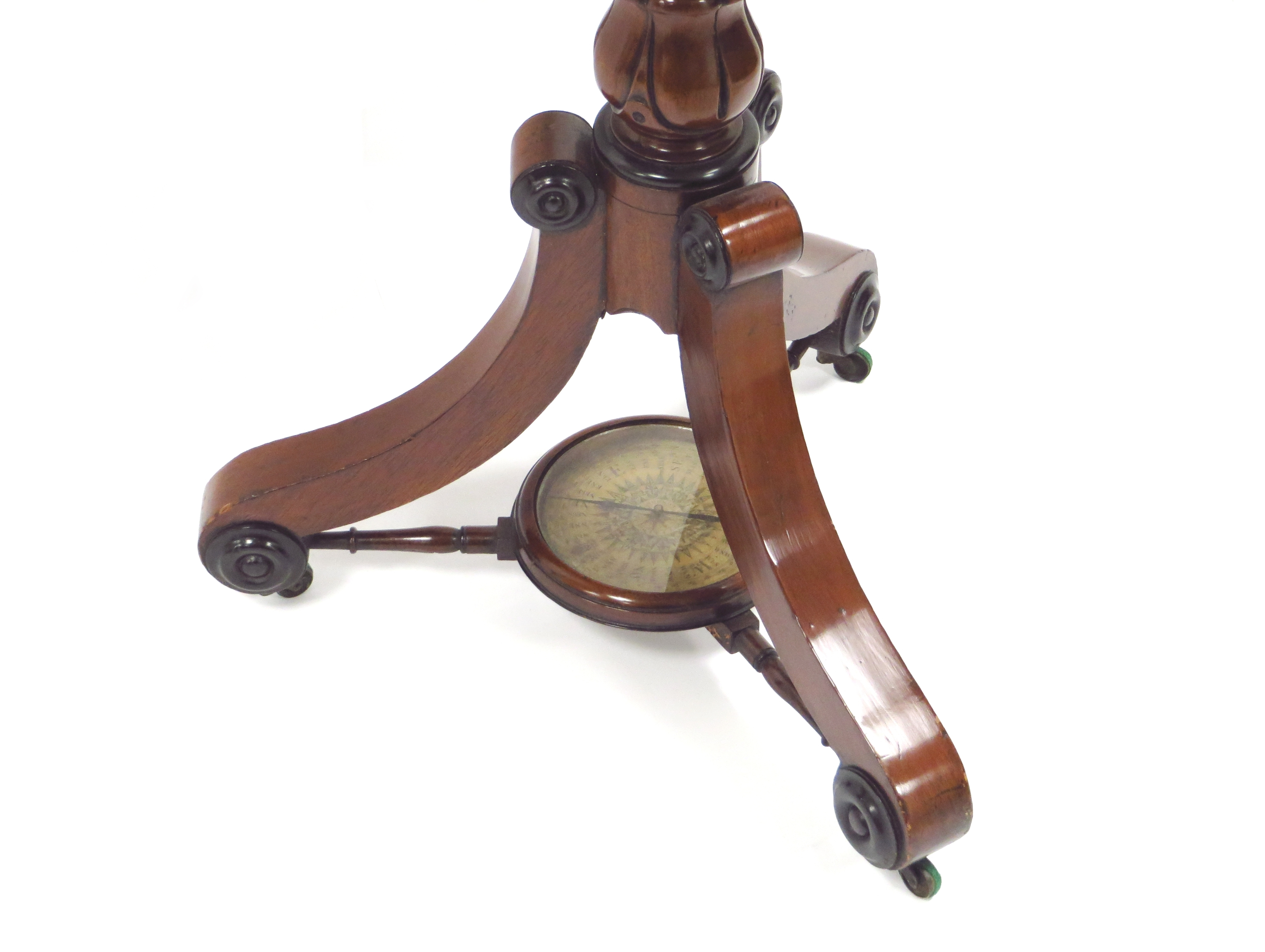 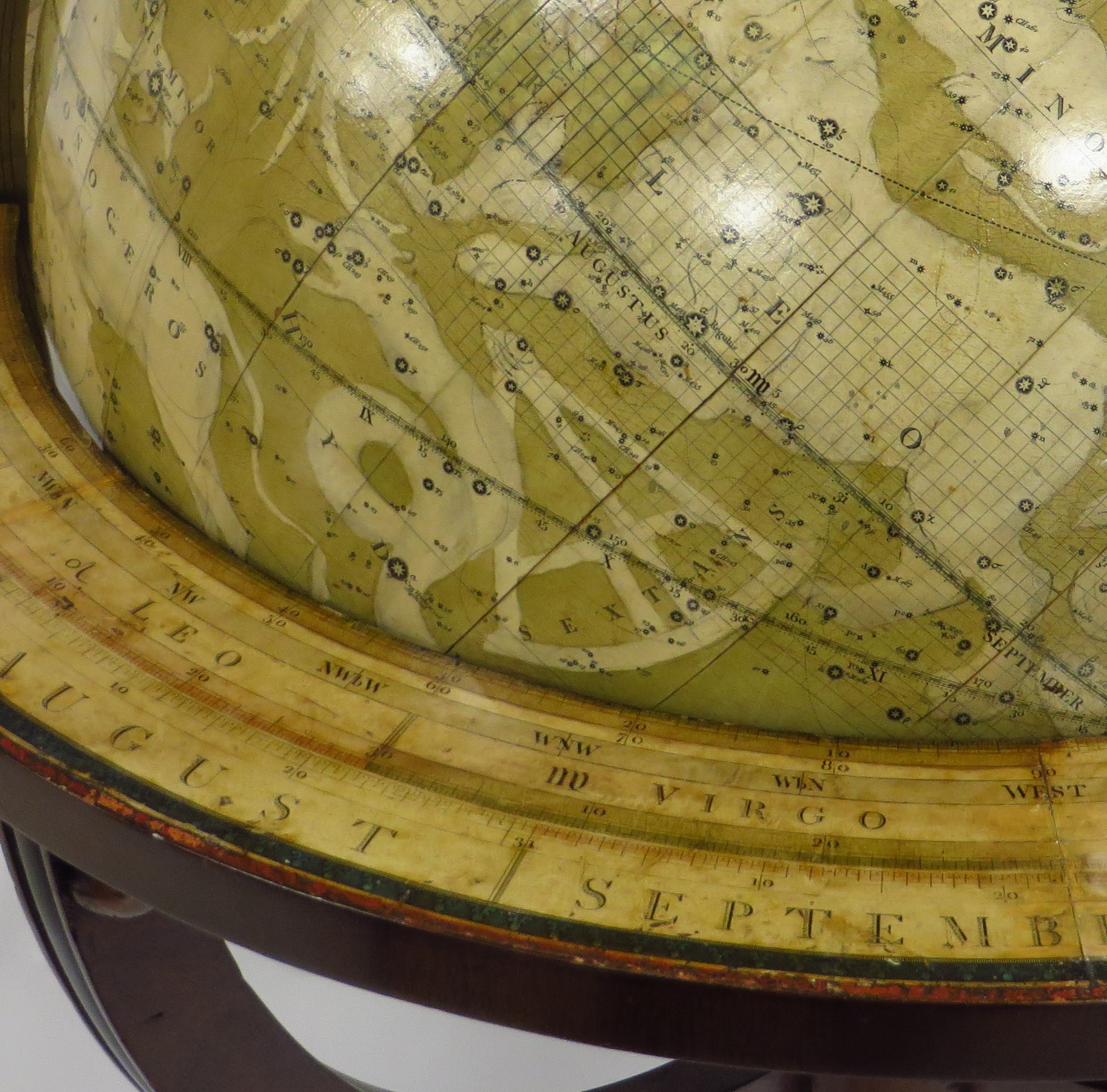 The Globes.
These magnificent globes are on beautiful mahogany and ebonised tripod stands, with a glass topped compass, mounted between three cross stretchers. There are castors, which may be a later addition. The globes consist of varnished copper engraved gores, enhanced by understated original hand colouring, and pasted on to papier-mache.
As you would expect these globes are engraved and produced to a very high standard, displaying an exacting level of detail and precision.

The Celestial Globe displays the stars, the constellations, clusters and nebulae in a beautiful and well thought out manner. Mythical figures and signs of the zodiac are seen. The equinoctial and solistitial colures are graduated in degrees.

The Terrestrial Globe displays the newest and latest geographical and political improvements around the world.
All visual information is presented in an elegant ?easy-on- the-eye? style that is both pleasing and comforting. There is plenty of map detail to be had for both the casual, and the more acute observer. Numerous coastal towns, cities and settlements are shown, as are some of the significant inland destinations. Nautical information such as bays, inlets, capes, and reefs are engraved. Other important details are not neglected; mountain ranges, principle rivers, political divisions and boundaries; they are all there for the informed and the curious alike. In addition to the positioning of the Tropics of Cancer and Capricorn, and the equator, there is an analemma situated in the Pacific Ocean. To get these lovely globes into some historic perspective, they were produced and published within the decade that the world began to issue its first postage stamps; Britain was sending its first colonists to New Zealand; Britain takes Hong Kong from the Chinese (until 1997); the first Afghan War was well underway; whilst in America, covered wagon trains began to make the long westward journey to California; TX becomes the 28th US state after obtaining its independence from Mexico; the Smithsonian Institute is established; and in Europe, Hungary officially splits from Austria.

Condition.
Both globes are in good overall condition. The terrestrial globe has areas of rubbing, a little retouching, and some slight discoloration, primarily confined to the South Pacific, the East Indies, Central Russia, and to the South Pole. With a few filled in losses around the horizon ring, but this is not serious, is well done, and perfectly legible.
The Celestial globe also has areas of gentle rubbing, some retouching and slight discoloration; most notably to Cancer, Serpens, Cassiopeia, and a tiny area below Canis Major. There is some evidence of minor restoration to the North Pole. The horizon ring has areas of infill and a little dried glue residue. Both globes have slight rubbing and marks to meridians. The stands are of sturdy and professional construction, with typical scattered nicks and marks throughout that are usual and entirely consistent with globes of this ilk. The compass glass has been replaced and is slightly loose.

George. F. Crutchley.
The London engraver, map and globe maker George Frederick Cruchley (1796-1880) began his career by being apprenticed to the cartographer Aaron Arrowsmith the elder, before branching out and establishing his own business firstly in Oxford Street in 1823 at a youthful 27 years old. He then subsequently relocated to Ludgate Street in the City of London in 1825 and then finally in 1833 to 81 Fleet Street, where it remained in activity until 1877. Although Cruchley?s main business was as a map seller and publisher, he also offered general engraving services and surveying. He produced popular maps of London and her environs, plus some map and travel guides of the British Isles and continental Europe. He was particularly well known for his 'New Plan' of London, first published in 1827 and then regularly updated to record the rapid growth of the capital during the 19th century, notably the expansion of the railways.

In the late 1840s Cruchley acquired the stock of the famous and celebrated late Georgian globe-making firm of John and William Cary, which was founded in the previous century in 1791, and began revising and re-issuing their plates under his own imprint - this included globes!

Globes in general.
Historically, globes are among the most ancient scientific instruments known to man. They can be dated back over two millennia, and are still manufactured to this day. The earliest tradition of globe making is mainly concerned with celestial globes ? man has always been fascinated and drawn to the heavens above. Celestial globes have always enjoyed a precedent of terrestrial globes. In fact, doubts about the feasibility of a terrestrial globe were firmly expressed by the Greek geographer Strabo; who wrote that such a globe would only make sense if its diameter were approximately 10 foot, presumably because only then could it furnish sufficient geographical detail! The great second century Egyptian mathematician, astronomer, astrologer, and geographer, Claudius Ptolemy also considered the large size of a globe to be somewhat of an obstacle, and noted a further shortcoming of a terrestrial globe ? that one could not view the whole world on it a single glance. As a result, terrestrial globes were not as popular until much later.
The eighteen and nineteenth centuries are recognized as the highpoints of English globe making, and this pair of globes illustrate this fact admirably. Many English globes were exported to the continent and throughout the world, many finding their way into famous scientific institutions, libraries, and into the stately homes of gentlemen and aristocrats.
The real beauty of globes is that they can be considered to be ?all things to all men?; to some they are useful and practical educational tools, (3D maps perhaps); to some others as beautiful and useful scientific instruments; and to more, they may be seen purely as decorative, beautiful pieces of furniture; to be envied and enjoyed, but more importantly, and above all, to be admired by all.