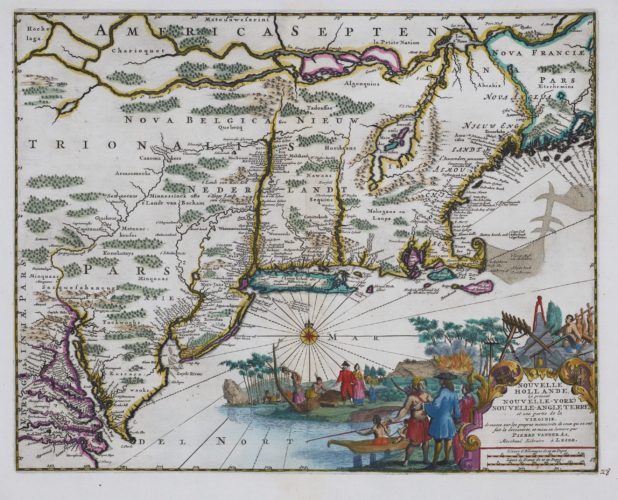 Arnold Montanus and Pieter van der Aa Nouvelle Hollande... Nouvelle Angleterre Made by Montanus in 1671, taken over by van der Aa in 1713; this map 1725 Van der Aa, a publisher of several early 18th-century atlases, based his 1713 map of New York and New England on a 1671 map by Arnoldus Montanus. The title cartouche was removed along with the scale of miles and decorative animals, and then a new title was added with a colonial scene depicting Native Americans assisting the Europeans in clearing the land and exploiting its natural resources. As part of the cartographic progression of maps of the Northeast initiated by Johannes Janssonius and Nicolas Visscher in the 1650s, this map is the only one of the thirty-map series to show Providence and to name Canada. There are new and important place names in Canada, along the Connecticut and Delaware Rivers, and around the Chesapeake Bay.

The map is full of Indian names, but many familiar colonial names sound quite familiar:

€ 1.900 View exhibitor's highlights
Back to Top